Wacom is a manufacturer of pen input devices. Several different models of their digital drawing tablets are installed throughout the Ben Shahn Center and Power Art Center computer labs on both Apple and Microsoft operating systems. Creative applications like Adobe Photoshop allow inputs from the pen to control the cursor, dynamically control different settings from pressure and tilt changes, and execute commands from programmable buttons, while benefitting from a natural and ergonomic input method.

All Wacom pens on campus feature a two button key on the side, these default primary and secondary mouse functions. The end of the pen also defaults to an eraser function. All functions are all customizable through local user settings.

Below is an example of different settings that can be applied to brushes in Adobe Photoshop. This can be accessed to the Windows menu and selecting Brushes or pressing F5. 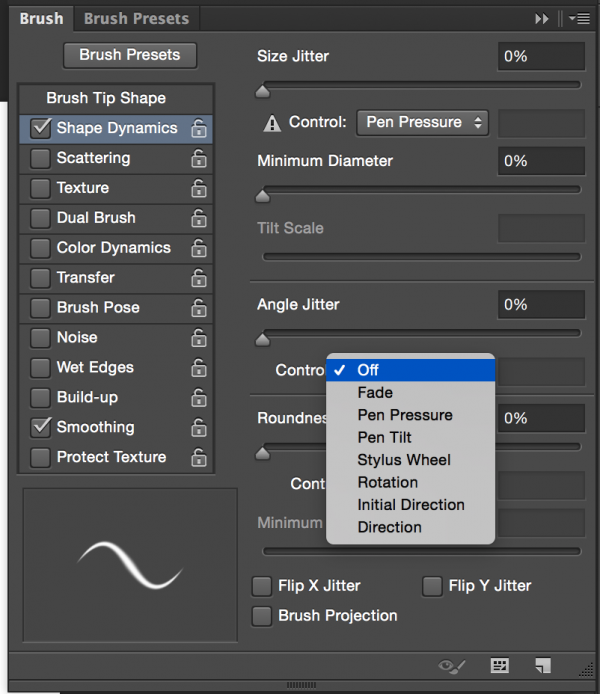 Wacom Settings can by accessed from System Settings in OS X and Control Panels in Windows. All models feature programmable ExpressKeys to set to your favorite commands, these are standard buttons. In addition, all feature either a programmable Express Strip or Express Ring for further features. Dynamic commands, like Scroll and Scale are often assigned to these buttons. 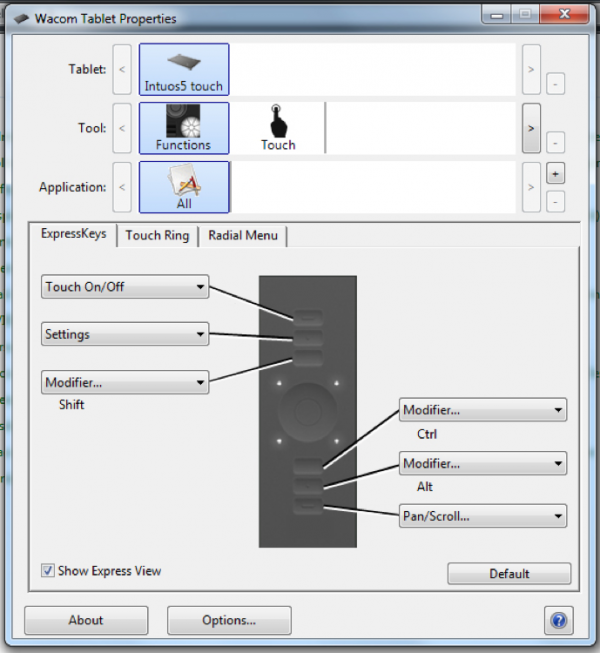 There is also a progammable pop-up radial menu for ease of access to additional commands or supplement what may already be on a button. Bellow is an example of how this pop-up overlay looks when activated. 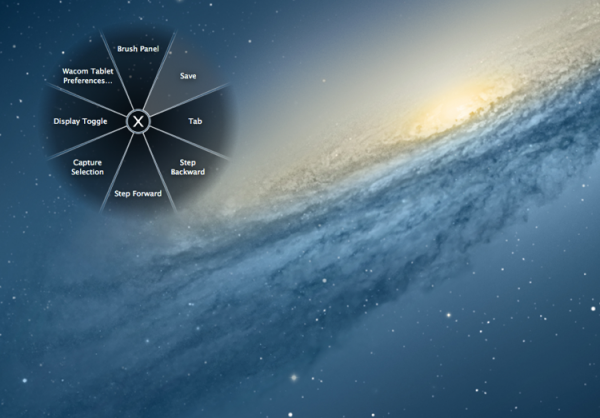 To gain the most precision from an Intuos Pro tablet, you can map the input to a specific window or smaller area. This will allow for more drawing surface per pixel. 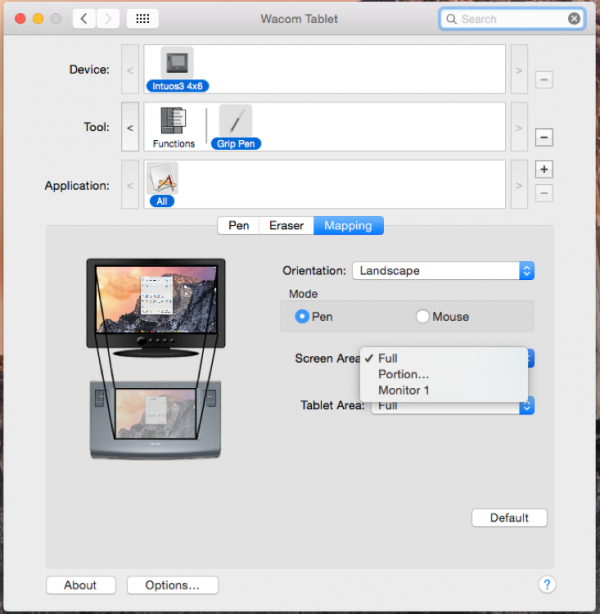 For greater precision and ergonomics Wacom Cintiq 22HDs can be located in BS205 animation labs. This is a 22" HD interactive pen display. The power button is located at the top, on the back. It is recommended to place the display at the edge of the table in order to take advantage of its rotational function. There are two shifter paddles on the rear of the Cintiqs stand, pressing the left allows tilting the display down flat, pressing the right allows tilting the display up.

It is recommended to calibrate your Cintiq before you use it. If you are logging into a workstation with an attached Cintiq for the first time you will be prompted to do this. Calibrating allows the Cintiq to align the pen, screen, and drawing surface to your personal viewing angle. Be sure to select the correct display from the list. 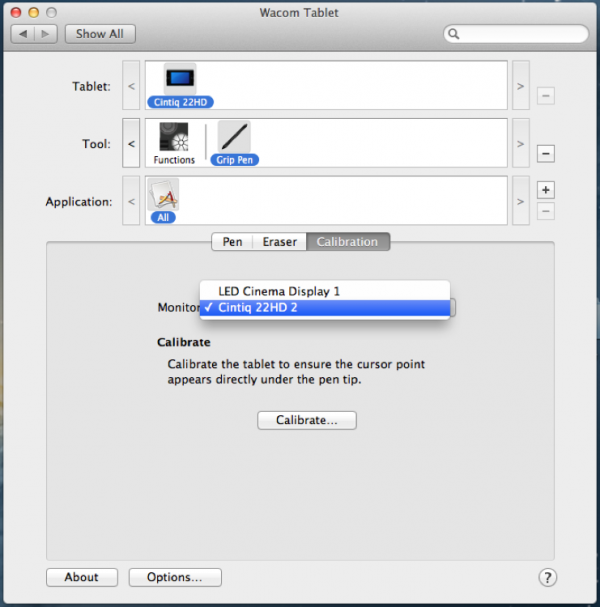 The Cintiq also feature programmable ExpressKeys, just like the Intros Pro. Touch Strips are located on the back of the display behind the ExpressKeys. 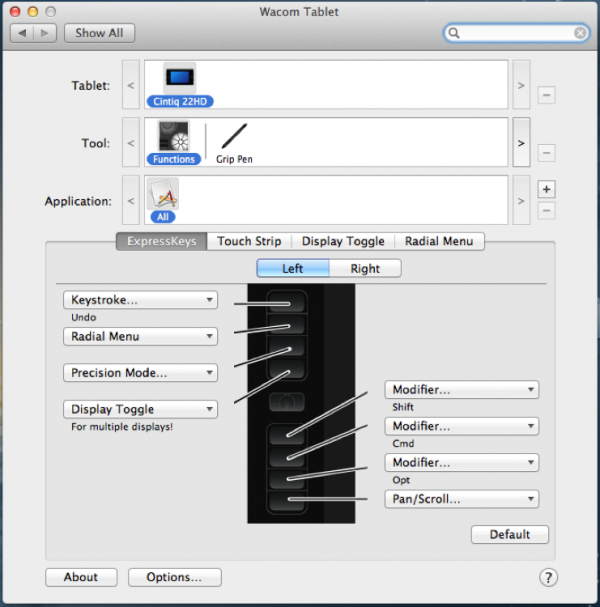 Press the the "i" button on the top right of the display. A pop-up overlay will display current ExpressKey, Pen, and Touch Stip commands. 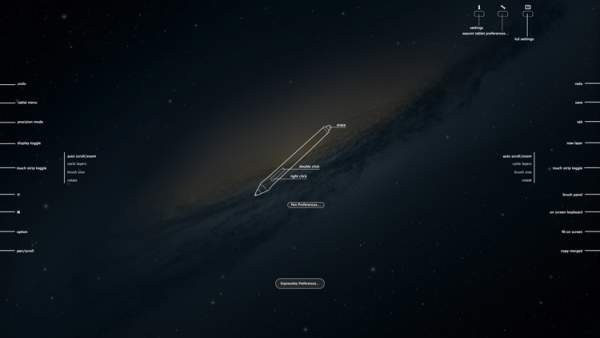 Additionally, a Cintiq can be programmed to work on the workstation's primary display, essentially making like a Intuos model. If you are unable to see the cursor under the stylus or the cursor constantly stays on the other display check the Display Toggle menu tab under Wacom settings. 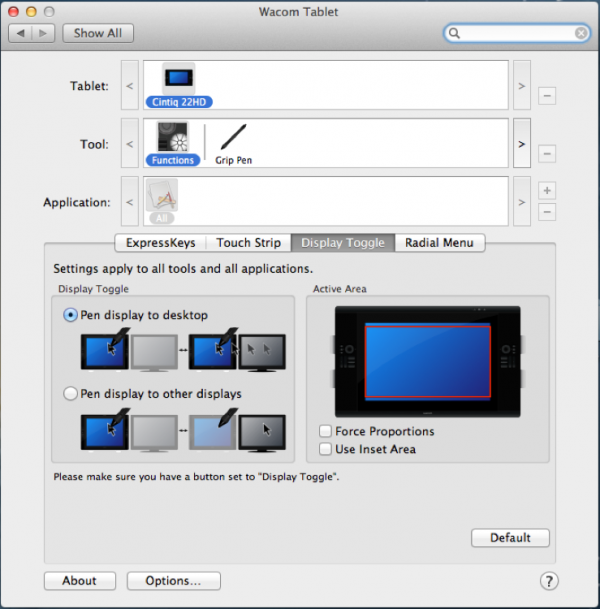